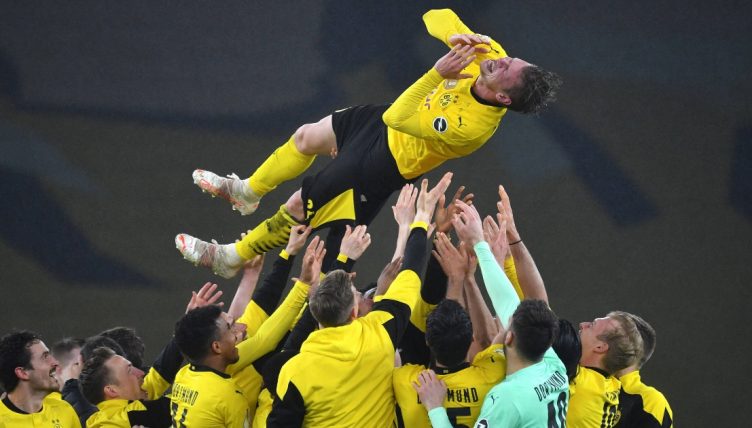 There were incredibly heartwarming scenes as Borussia Dortmund‘s celebrated winning the DFB Pokal, as club legend Lukasz Piszczek found himself unable to hold back the tears.

Piszczek is among Dortmund’s longest-serving players, and a stalwart of the legendary side under Jurgen Klopp that won back-to-back Bundesliga titles before reaching the Champions League final in 2013.

The 35-year-old Poland international has made 380 appearances for Dortmund, with the impressively dominant 4-1 victory over RB Leipzig securing his third DFB Pokal trophy. His team-mates threw him in the air as he cried tears of joy.

His contract expires this summer, and he will retire from professional football after 14 years in the Bundesliga. But he isn’t hanging up his boots just yet, announcing that he’s set to join his hometown club LKS Goczalkowice in Poland.

“I have concrete plans in Poland and have already postponed these plans for a year,” he said in 2020. “I want to play with friends from my hometown club Goczalkowice, where my father is vice-president, and take care of the youth academy that we started in 2019.”

“I grew up here, this is where I developed into the man I am today, which is why I wanted to give something back.”