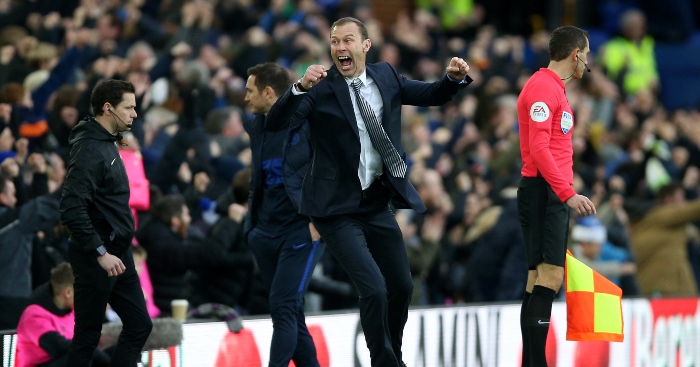 Duncan Ferguson secured a 3-1 victory over Chelsea in his first game in charge of Everton, and he showed plenty of passion on the touchline.

The Everton legend was appointed as interim manager at Goodison Park after Marco Silva was sacked earlier this week and the 47-year-old received a rapturous reception before the game.

Ferguson’s side then got off to a dream start when Richarlison headed Everton in front after only five minutes and Dominic Calvert-Lewin doubled their lead in the second half.

The caretaker manager wasn’t able to control his emotions, and he ran down the touchline before picking up a ball boy and spinning him in the air.

Chelsea pulled a goal back through Mateo Kovacic but Ferguson was celebrating wildly yet again when poor defending allowed Calvert-Lewin to score his second of the game.

Ferguson hugging a ball boy 🤣🤣. I love him so much 💙💙💙. God does exist and he goes by the name of Dunc 💪👊 pic.twitter.com/6Ym1ekyHkj

You won’t see a reaction like that from any Everton manager! Past or Future!