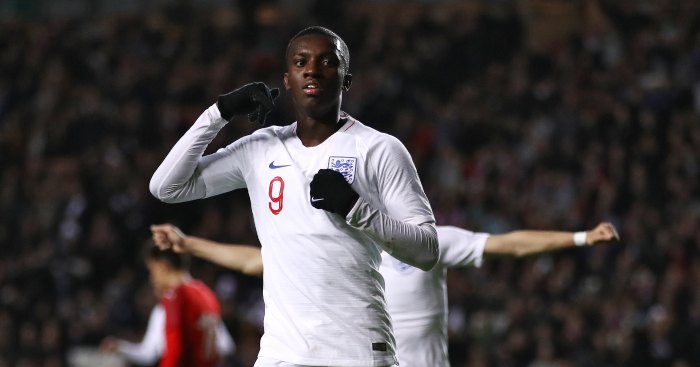 Leeds United‘s on-loan Arsenal striker Eddie Nketiah was back among the goals with a hat-trick as England Under-21s thrashed Austria Under-21s 5-1 at Stadium MK.

Nketiah is spending the season on loan at Elland Road, scoring four goals in all competitions to date while he still waits for his first Championship start ahead of Patrick Bamford.

The poacher also scored twice for England Under-21s in a 3-2 victory over Turkey in September, and continued his good form against Austria, with Callum Hudson-Odoi also bagging a superb brace.

Nketiah’s first came as he diverted a scrappy set-piece into the back of the net from inside the six-yard box.

And he grabbed his second with a smart header from close range.

The technique on that cross 🔥 pic.twitter.com/aRAcEu4Zqg

The 20-year-old summed up his predatory instincts by completing his hat-trick with another poacher’s finish – and he could even had a fourth, only to see a spot-kick saved by Austria’s goalkeeper Fabian Ehmann.

The young Gunner rounds off an awesome night for England by stroking home his third!