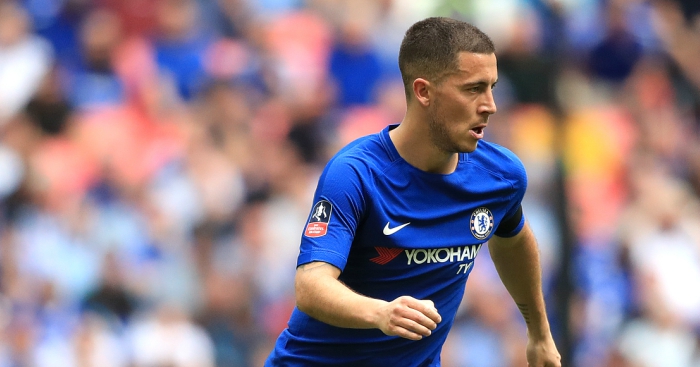 Eden Hazard was back in the groove as Chelsea beat Southampton in the FA Cup semi-final – as evidenced by a cheeky rabona cross.

Chelsea beat Southampton 2-0 at Wembley and will now meet Manchester United in the final after Jose Mourinho’s men beat Tottenham 2-1 on Saturday.

Olivier Giroud opened the scoring with some neat footwork after an excellent assist from Hazard and Alvaro Morata made it 2-0 with a late header.

Hazard’s form has come under some scrutiny this season but he was back to his best against the Saints and was clearly feeling confident, producing a rabona cross with Victor Moses tried to connect with an overhead kick.

The sight of Hazard playing with confidence got plenty of Chelsea fans excited on social media.

Eden Hazard is literally one of the very few players that doesn't need stats to back him up, all you need to do is watch him and you'd be automatically amazed.

Eden Hazard MOTM in a cup semi final, so glad he plays for my club. When he’s on form he’s just unplayable man, insane to watch

Chelsea book their place in the #FACup final after goals from Giroud and Morata, but Eden Hazard was the best player on the pitch today. His passing accuracy, movement, his ability to pick out a pass, and he even whipped out a rabona. I love that man. #CHESOU

Victor Moses was about to overhead kick an Eden Hazard rabona cross into the net and Southampton’s defence had the audacity to clear it away. Expel them from the FA Cup immediately.

Even whipping out the rabona. 💫 pic.twitter.com/6rRoeLG1qX