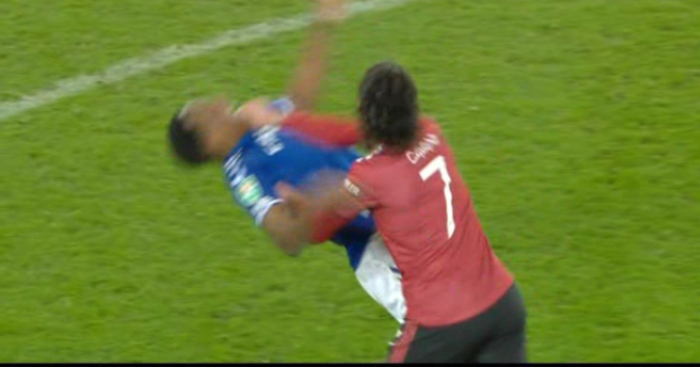 Edinson Cavani scored a crucial late goal as Manchester United won 2-0 at Everton to book their place in the League Cup semi-finals, but should the striker still have been on the pitch?

United will face Manchester City in the final four after Cavani and Anthony Martial scored late goals to see off the Toffees in an intense encounter.

Six minutes into the second half, Cavani was involved in a clash with Yerry Mina, grabbing the defender by the throat before the Everton man took a tumble.

Ole Gunnar Solskjaer played down the incident after the match, telling Sky Sports: “Nothing in it, two South Americans that have had a few battles before, they met in Copa America qualifiers so no.

“This was a proper game of football, with fans, tackles, yellow cards and chances at both ends. I enjoyed it.”

Was Cavani a lucky boy? Watch below and make up your own mind.