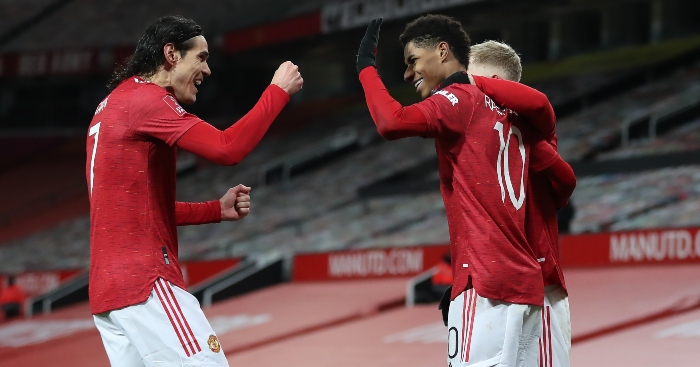 Marcus Rashford may have scored the goal for Manchester United but Edinson Cavani stole our attention with his joyous celebration.

Cavani enjoyed an eventful game as United beat Liverpool 3-2 in the FA Cup, hitting the post with a crashing header and generally being a handful for the inexperienced Rhys Williams.

The moment that caught our eye above everything else was his brilliant reaction to Rashford’s second-half goal.

As his team-mate slotted a cool finish underneath Alisson to give United the lead, Cavani let out an amusingly impassioned holler of excitement.

If this wasn’t enough, the Uruguay international also windmilled his arms in the manner of Bart Simpson fighting his sister.

Empty stadiums have taken so much from the game but hearing Cavani’s celebration put a smile on our faces.

Cavani’s been playing on pro clubs with celebrations like that. #MUNLIV pic.twitter.com/mIbPgCYpYT