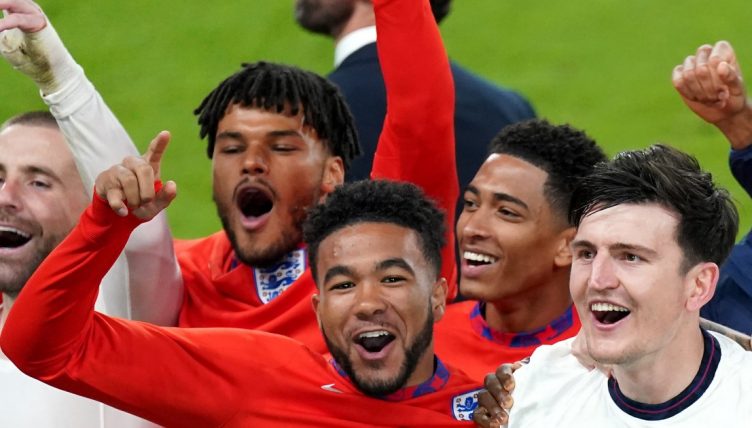 England‘s 2-1 comeback victory over Denmark produced one of the most jubilant nights in the history of Wembley stadium as over 50,000 fans roared Gareth Southgate’s men on to the final of Euro 2020.

Whatever happens against Italy, the semi-final win – breaking a hoodoo of four straight defeats at that stage of major tournaments since the World Cup triumph of 1966 – is a night destined to be relived for years to come.

From all the players singing along to ‘Sweet Caroline’ after the final whistle, to Mason Mount giving his shirt away to a starstruck fan, there were scenes that England fans have waited lifetimes to see.

Another video has emerged of the celebrations, which have given us a great feel for what it was like to be in the stadium that night. One journalist was filming England’s bench as Harry Kane stepped up to score the match-winner, at his second attempt after his penalty was saved by Kasper Schmeichel.

You can see the likes of Mason Mount and Declan Rice, who had both played over 90 minutes before getting taken off in extra time, along with unused subs Jude Bellingham, Tyrone Mings and Reece James, ecstatically celebrate and gesture towards the fans for one of the biggest goals in the history of English football.

How are you feeling today England fans?

Relive the moment when Harry Kane turned in that rebound from Wembley!