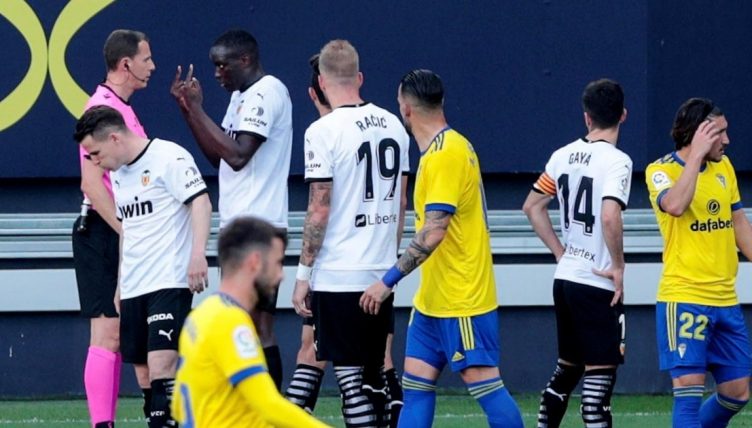 The entire Valencia team walked off the pitch against Cadiz after an alleged racial slur against Mouctar Diakhaby.

The La Liga match was stopped after 29 minutes as, following conversations with the referee, Valencia captain Jose Luis Gaya led his team off, but it restarted again around 20 minutes later with Diakhaby watching from the stands as his teammates played without him.

Cadiz’s Juan Cala, the player to have allegedly abused Diakhaby, was not replaced at first, although he was then substituted at half time.

Diakhaby and Cala went in for a challenge together and clashed. Following this incident, the Valencia man turned back angrily to confront his opponent.

It was here that cameras caught Paulista saying: “Negro de mierda – no” [“shitty black – no”]

Following their 2-1 defeat, Valencia released a statement saying: “The team has met up and decided to return to the pitch to fight for the badge, but firm in their condemnation of all forms of racism.”

The club are expected to make a formal complaint after the game, either with the league or the Spanish football federation.