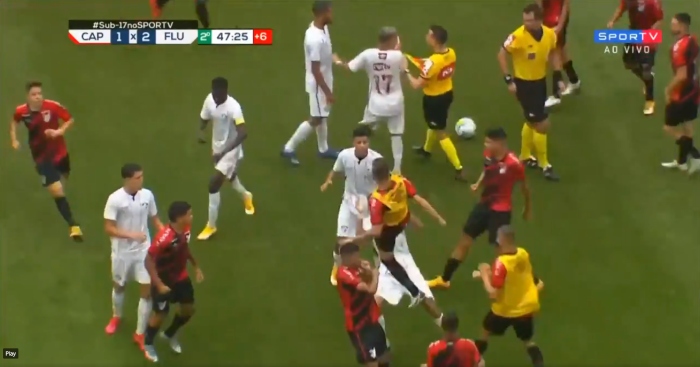 The Under-17 Brasileirao final between Fluminense and Athletico Paranaense descended into chaos with nine red cards in the closing stages.

With Fluminense leading 2-1 in injury time, Joao Neto was fouled by Athletico Paranaense’s Ataide and then kicked out at his opponent.

The altercation between the pair quickly descended into a pile-on as players from both sides rushed over to support their team-mates.

Substitute Joao Gabriel even ran off the bench and delivered a flying karate kick that connected squarely with Neto’s face, sparking an even bigger brawl.

A total of nine players, including substitutes, were sent off following the fracas, delaying the match for 10 minutes and causing both clubs to finish with only eight players on the pitch.

“First of all, I wanted to apologize on behalf of my teammates for the fight at the end of the match,” Fluminense winger Kaka said at full time.

“But I know that it will not tarnish our good victory and our campaign. We are champions of the Under-17 Brasileirao – an unprecedented title for our club.”