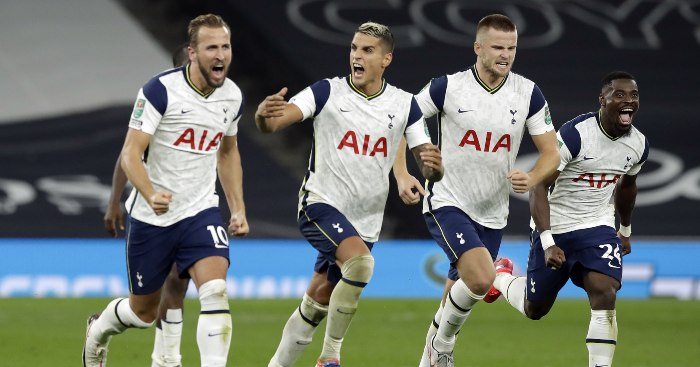 There may be no love lost between Tottenham and Chelsea, but Eric Dier put rivalries to one side in the aftermath of Spurs’ penalty shootout victory over the Blues on Tuesday night.

The two teams that infamously played out the Battle of the Bridge locked horns once again in the League Cup, with Spurs progressing on penalties after a 1-1 draw in 90 minutes.

Timo Werner had given Chelsea the lead in the first half with his first goal for the club before Erik Lamela equalised late on to take the game to a shootout.

After the first nine penalties had all been scored, Mount stepped up to miss the decisive spot-kick as Spurs progressed to the quarter-final.

Rather than celebrate with his Tottenham team-mates, Dier, who had earlier ran off the pitch during the game to go to the toilet, went straight to fellow England international Mount to console the midfielder for his miss.

Eric Dier going straight up to Mason Mount to console him after his missed penalty instead of celebrating with his Tottenham teammates!@ericdier | @masonmount_10 pic.twitter.com/XXc9oHZixR