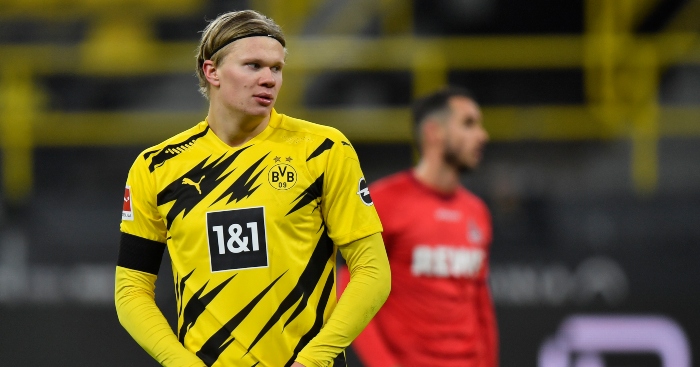 If Borussia Dortmund are chasing a game, there won’t be many people they want a chance to fall to more than Erling Haaland.

The Norway international has shown time and time again that he knows how to hit the back of the net, having recorded a remarkable 17 goals from 14 games in all competitions this term.

While it would be easy to think the 2020 Golden Boy winner is some sort of goalscoring machine, it turns out he is human like the rest of us.

Lucien Favre discovered that fact at the worst possible time, as Dortmund did all they could to claw their way back into the game after a brace from Cologne midfielder Ellyes Skhiri.

An effort from Thorgan Hazard drew Dortmund within one goal of the away side, and the ball had gone into a dangerous area with just over 30 seconds left on the clock.

As the ball was cut back to Haaland, who was standing in the middle of the goal, it seemed almost inevitable that the home side would walk away from this game with a point.

However, the 20-year-old produced an absolutely disastrous effort from close range, completely missing the target.

The moment of realisation on the Norwegian’s face says an entire story of its own, but knowing him, the striker will likely score a hat-trick in his next game and this will be forgotten.

#Haaland #BVB what a miss… 😬 pic.twitter.com/KqjgpmX76m