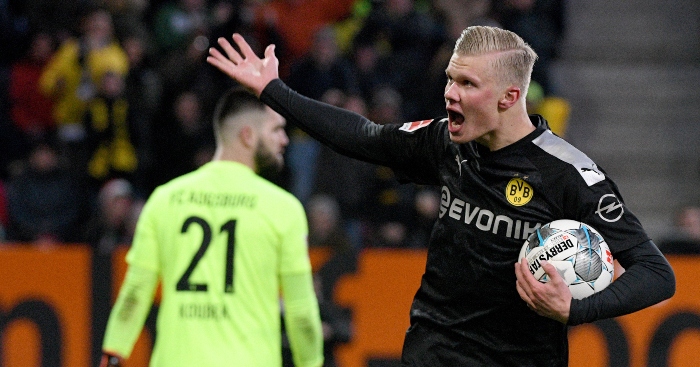 Erling Haaland showed Manchester United what they are missing out on with a sensational hat-trick on his Borussia Dortmund debut.

The 19-year-old became one of the hottest young prospects in Europe after scoring 28 goals in 22 appearances for Red Bull Salzburg this season.

Despite links with United and Juventus, Haaland decided to sign a four-and-a-half-year deal with Dortmund at the start of this month.

He started on the bench for their trip to Augsburg, but the home side raced into a 3-1 lead after two goals from Florian Niederlechner and a Marco Richter strike.

The Dortmund manager turned to his bench in the 56th minute and Haaland was brought on in place of Lukasz Piszczek.

Haaland made an immediate impact as the striker scored after three minutes, smashing a low finish into the bottom corner after being played through by Jadon Sancho.

Sancho then levelled the scores before Haaland put Dortmund in front with a tap in from close range in the 70th minute.

The Norwegian completed his hat-trick in the 79th minute by racing clear of the Augsburg defence and sliding a left-footed strike under the goalkeeper.

Watch his goals below.