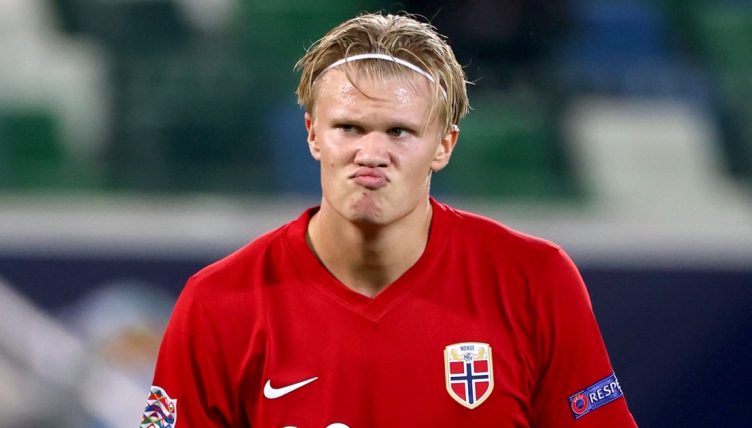 Borussia Dortmund’s Erling Haaland showed why he’s one of the most sought after players in the world during a Norway training session.

Haaland, who once scored nine goals for Norway’s youth side in a 12-0 victory over Honduras in the Under-20 World Cup, is now one of the best finishers in world football.

The striker has 33 goals in 31 appearances for Dortmund this season and has been heavily linked with moves to Manchester United, Manchester City and Real Madrid.

“[Haaland] doesn’t care about anything other than the goal,” Thierry Henry recently said on Sky Sports’ Monday Night Football show. “Other players will go on the wing – he wants to stay within the frame of the net. Between the two posts, he knows he is lethal.

“He’s so powerful, by the way. He just wants to run in behind and the way he finishes is ridiculous. The ability that he has: he believes so much in himself, and I like that.

“There’s a bit of cockiness about him, if I can use that word. You’ve got to look at people and say, ‘I’m going to score’. He doesn’t want to go anywhere else other than to score goals. Right now, he’s at the top of the game – already, at his age.”

He tried to carry his excellent club form onto the international stage but failed to score in Norway’s World Cup qualifiers against Gibraltar and Turkey.

Despite being on a two-game goal ‘drought’, Haaland still looked full of confidence during a recent training drill.

After the ball was thrown high into the air, the 20-year-old smashed it into the top corner with his left foot, leaving the goalkeeper with no chance.

Erling Haaland is not messing around 😂🤖
pic.twitter.com/cZVpPqTyuQ

Can you name every Norwegian to score 5+ goals in the Premier League?