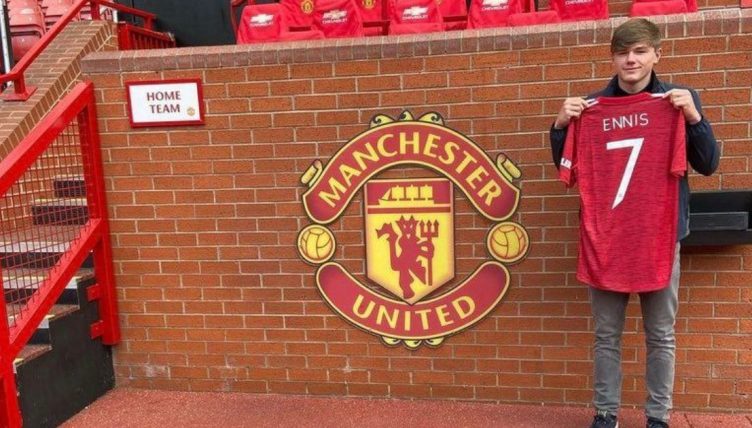 Ennis initially came through Liverpool’s academy and hit the headlines with a hat-trick in their FA Youth Cup third-round clash against Sutton United in March 2021.

But he rejected a scholarship offer from Liverpool and then visited Chelsea’s training ground before deciding to join United last summer.

The 17-year-old is regarded as a brilliant prospect and was even shortlisted in The Guardian’s Next Generation 2021 list.

He had a steady but low-key start to his debut season at United, registering one goal and one assist in his first seven Under-18 Premier League appearances in 2021-22.

The winger has had to compete with Alejandro Garnacho and is yet to start any of United’s FA Youth Cup games, featuring as a substitute just twice.

But Garnacho, who is currently training with the Argentina squad, has been promoted to United’s Under-23s and Ennis has taken his opportunity with both hands.

He recently scored two goals in a 5-5 draw with Liverpool’s Under-18s before netting another brace in a 4-1 win over Leeds United.

Ennis continued that goalscoring form during the Under-18s Premier League game against Sunderland on Thursday afternoon and broke the deadlock in the 39th minute.

The teenager pounced on a loose ball inside the penalty area and cut inside onto his right foot before curling a brilliant effort past the goalkeeper and into the net.

Ennis’ strike proved to be the only goal of the game and United moved up to fifth in the Under-18 Premier League table.

Ethan Ennis with a beauty to give United the lead 🎯 pic.twitter.com/3FmE391IXr