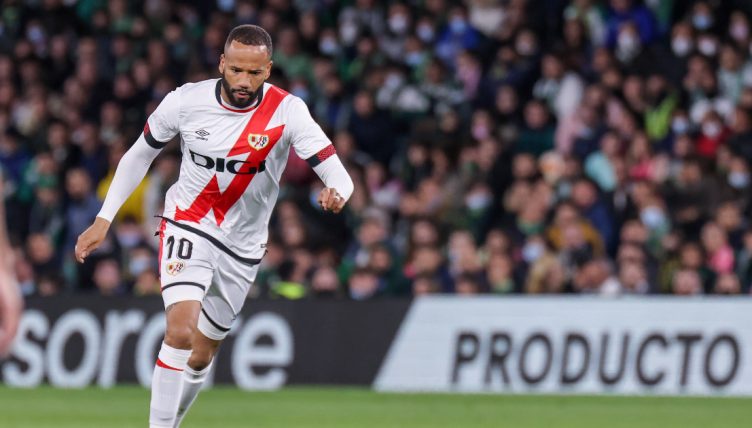 When Cristiano Ronaldo left Manchester United in 2009, for a world-record move to Real Madrid, the question on everyone’s lips was who was going to replace him?

One of the best players in the world leaving your club is never ideal, but United had a lot of money to play with, and the prospect of another big star replacing him was an exciting one.

United struggled in their first post-Ronaldo season, but a season later, signed another young exciting Portuguese winger who could try and fill the boots of the superstar.

This one did not have quite the same level of success.

Bebe joined United from Vitoria Guimaraes for around £8million, and was seen as the next big thing.

After seven appearances, two goals and three loan spells in four years, Bebe was released from his nightmare at Old Trafford in 2014, and after a few years of ground-hopping, finally found a home at Rayo Vallecano.

In Thursday night’s Copa Del Rey semi-final clash at Real Betis, Rayo were aiming to get to their first ever Copa final.

Bebe thought he had sent them on their way, levelling the tie on aggregate in the 79th minute, which should have sent the game to extra time.

And he did it in the same way Ronaldo used to, with a free-kick hit with such precision and power from such a long way out, one would have thought it impossible.

Bebe was notable at Manchester United, for being signed by Sir Alex Ferguson when the manager had never even seen him play.

“I know Real Madrid were hovering and so were Benfica,” Ferguson stated at the time of the transfer. “It was one of those decisions that had to be made quickly.

Real Betis went on to break Bebe and Rayo Vallecano’s hearts, as Borja Iglesias scored a stoppage-time winner to send the Verdiblancos to the final.

If Bebe did this at United who knows how things could have panned out.

Rayo Vallecano were minutes away from losing this Copa del Rey semi-final, but now they're level on aggregate with Betis 🔥 pic.twitter.com/LtvDvgp7S1