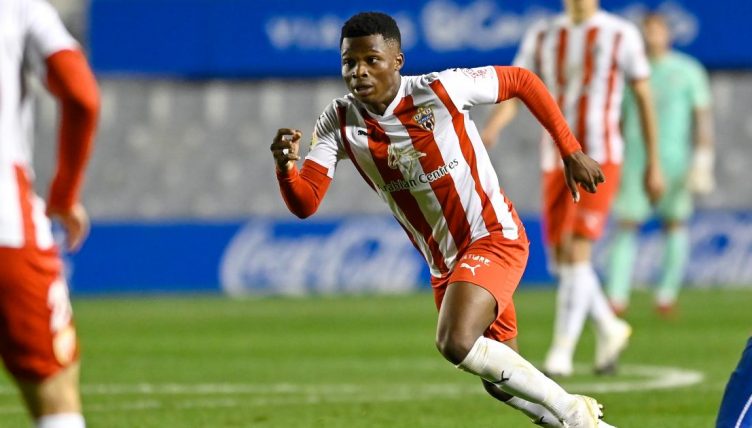 Manchester United academy graduate Largie Ramazani showed his former club what they are missing with a sensational goal for UD Almeria.

Ramazani made his first-team debut for Manchester United during the Europa League defeat to Astana in 2019, but that six-minute cameo proved to be his one and only appearance for the club.

Despite being offered a new contract by United, the striker opted to pursue his career away from Old Trafford and joined Spanish second division side UD Almeria on a free transfer in August 2020.

“I want to thank the club for helping me become a better footballer/person and for making me and my family feel at home during my time here,” Ramazani said on Twitter.

“After all the years I can only say thank you to the club, to the fans that have supported me since the first day I wore this jersey and of course thank you and good luck to my team-mates, who helped me settle in since day one not only as team-mates but as friends/family.

“Today I say goodbye to Manchester United but I take with me many memories, lessons and great moments that will live with me forever. It has been one of the best years of my football career.”

The 20-year-old has scored three goals in 19 appearances in all competitions this season but was recently handed some match practice with Almeria’s academy team in a friendly match.

He certainly made an impact, scoring a sensational David Beckham-esque goal from deep inside his own half.