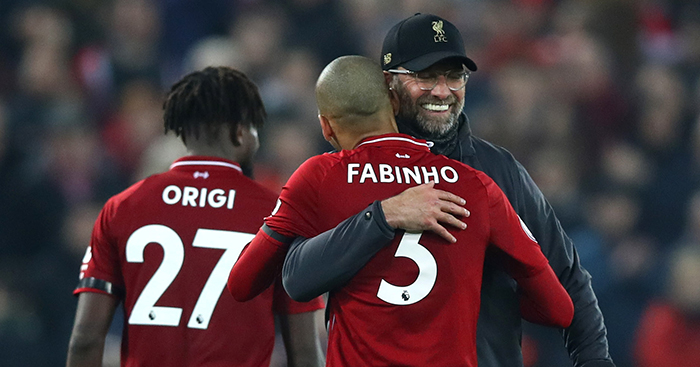 Sadio Mané and Virgil van Dijk each scored twice in Liverpool‘s 5-0 win over Watford on Wednesday night – but Fabinho impressed equally as much with his defensive work.

Liverpool remain a point clear of Manchester City at the top of the Premier League following their latest victory, perhaps crucially boosting their goal difference on a night when their main title rivals could only win 1-0.

Divock Origi scored their other goal, while Trent Alexander-Arnold impressed once again with three assists, but the Reds also needed to be strong defensively against a Watford side in buoyant mood going into the game.

Sadly for the Hornets, this time they came up against a midfielder who simply refused to let them past, with Fabinho making a combined eight tackles and interceptions – more than any other player on either side.

His best moment came when he made up ground to stop Gerard Deulofeu in his tracks with a tackle you will need to watch several times to make sense of.