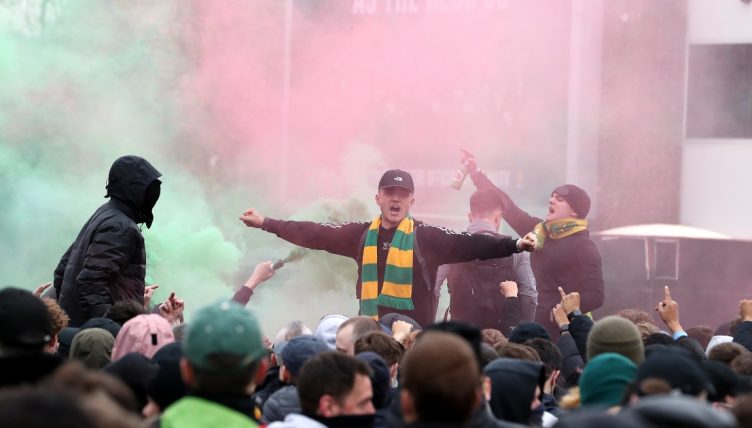 Fans have been gathering outside Old Trafford before Manchester United‘s rearranged match against Liverpool.

The Premier League clash between England’s two biggest clubs was due to be played on May 2nd but had to be postponed after protestors broke into the stadium and ensured the two teams couldn’t leave their Manchester hotels.

But United fans have continued to make their dissatisfaction against the Glazer family known and crowds have been gathering outside Old Trafford since the early afternoon.

The game will go ahead on this occasion as the Liverpool team coach was able to make its way through the crowds and into the ground.

Speaking on Sky Sports, Roy Keane said: “Manchester United fans are not done with this, we saw some protests a few weeks ago, but I think there is still a lot to come.

“The concern is that when the fans can come back to the stadium, you could have 70,000 fans showing up at Old Trafford, frustrated with what happened. Things can get much worse.”

Current scenes outside Old Trafford ahead of Manchester United VS Liverpool#MUNLIV pic.twitter.com/rd7LhW7j5v

🗣"Quite a big crowd of supporters are here now." @SkySports_Tim gives the latest from Old Trafford with more and more fans joining the Manchester United fan protest #MUNLIV pic.twitter.com/VcXCICDic8