Watch: ‘F*ck you & your wife’ – Lukaku and Ibrahimovic have furious bust-up 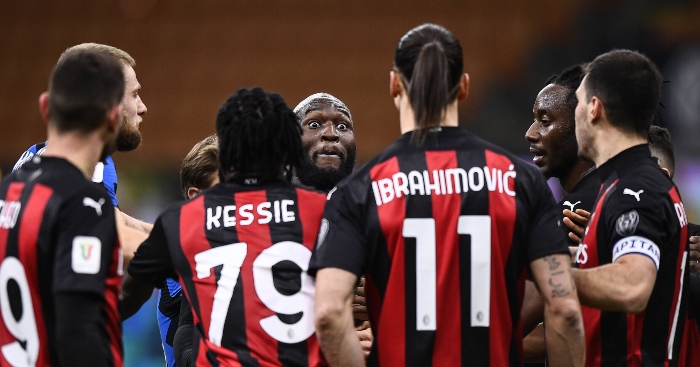 Ibrahimovic gave AC Milan the lead against Inter in the Coppa Italia quarter-final before the two strikers clashed heads on the stroke of half-time.

They were both booked by the referee but continued the argument and traded verbal insults.

The former Sweden international can be heard yelling at Lukaku: “Go do your voodoo sh*t, you little donkey.”

Inter staff then had to hold Lukaku back as the teams made for the tunnel at half-time.

The 27-year-old was heard saying: “F*ck you and your wife. He wants to talk about mothers? Son of a b*tch.”

Ibrahimovic received a second yellow for tripping Aleksandar Kolarov in the 58th minute before Lukaku equalised from the spot and Christian Eriksen scored a late winner for Inter.

Zlatan and Lukaku are going at it 😳 pic.twitter.com/yMLFI72tiz

This fight between Zlatan and Lukaku went too far I think 💀 pic.twitter.com/Gjgbv1JEkf

Don’t know what happpened but Lukaku is so pissed off he wants to fight ibra so bad😂 pic.twitter.com/7eAZZHYH1M