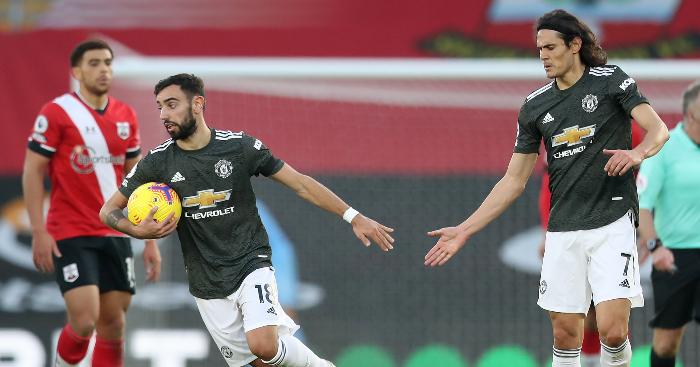 It’s easy to forget Bruno Fernandes has been at Manchester United for less than a year, given how much of a leader he already is.

The latest example of many came at St Mary’s as Ole Gunnar Solskjaer’s men mounted a three-goal second-half comeback to beat Southampton 3-2.

Having scored the first to get United back into the game, Fernandes’ long-range effort was then headed in by half-time substitute Edinson Cavani.

The Uruguayan striker wheeled off to celebrate at the corner flag, but Fernandes barely allowed himself a fist-pump before remaining at the edge of the D and beckoning his team-mates to go and find a winner.

Evidently not satisfied with a point, he got his wish when Cavani scored his second of the game in injury-time.

Watch his reaction to Cavani’s equaliser below:

After Cavani scored the second goal, all of the players went to celebrate only Bruno Fernandes who doesn't celebrate with the team, He rather asked them to come back in to score the third goal.

What a mentality this player has! 🧠 pic.twitter.com/CSsQT7lCoo