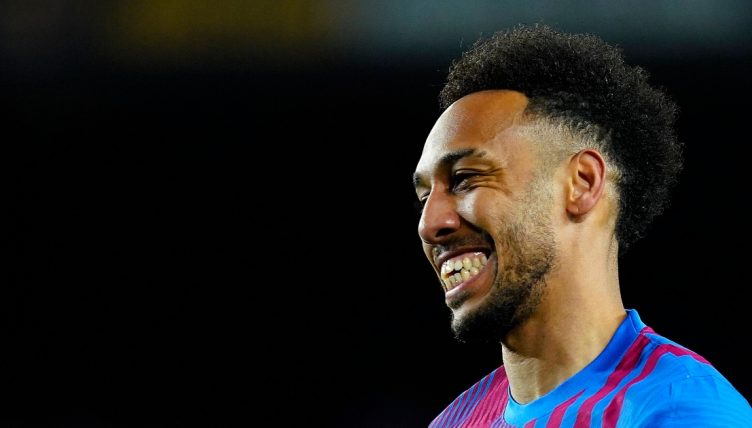 Ex-Arsenal striker Pierre-Emerick Aubameyang has continued his hot streak since joining Barcelona earlier this month – and he celebrated in style for his latest goal.

The Gabon international had scored four goals in his first three starts for the Catalan club, including a hat-trick at Valencia last weekend, and he added to that tally against in-form Athletic Bilbao this evening.

Gerard Pique’s towering header came crashing off the crossbar, and Aubameyang was quickest to react at the rebound, getting himself into the right spot at the right time to slam home the rebound.

He’s now matched his tally for league goals from the first half of the season at Arsenal – from just two starts at Barcelona.

Meanwhile, Aubameyang’s former team-mate Gabriel Magalhaes has recently revealed that he was sad to see the striker leave Arsenal.

Pierre-Emerick Aubameyang of FC Barcelona during the La Liga match between FC Barcelona and Athletic Club played at Camp Nou Stadium on February 27, 2022 in Barcelona, Spain.

“Aubameyang is in my heart, we all wanted him at Arsenal,” the Brazilian told Ohmygoal.

“It’s something that happened between him and the coaching staff, the other players weren’t in it.

“I said goodbye to him before he left, I hope he enjoys Barcelona, he is a very nice person with a big heart and I love him very much.”

His red-hot start to life at the Camp Nou continues thanks to some great technique to finish while he was falling backwards 🔵🔴 pic.twitter.com/ysBCMdojS1