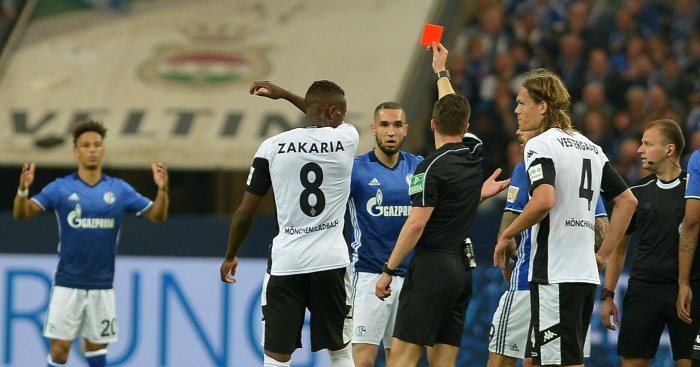 Bentaleb tussled with Gladbach forward Lars Stindl just 10 minutes in, having a few swipes at the 29-year-old before eventually being booked for landing a late foul on the halfway line.

And as the players clashed following the cynical foul, Bentaleb struck Stindl in the face, which was not seen by the officials in a crowded melee of players.

But, the offence was caught by the video assistant referee (VAR), and former Spurs midfielder Bentaleb was shown a straight red card less than 30 seconds after the yellow card was shown.

The decision – which is evidently the correct one – was so quick to be seen by the German off-field officials that the TV cameras didn’t even pick up that they were reviewing the footage before the card came out of the referee’s back pocket.

Watch the incident below.

A celebration of Paul Scholes’ goal against Barcelona – his greatest ever

Watch: VAR orders players back onto field during HT after penalty awarded