Watch: Frank Lampard’s fascinating thoughts on why his England failed 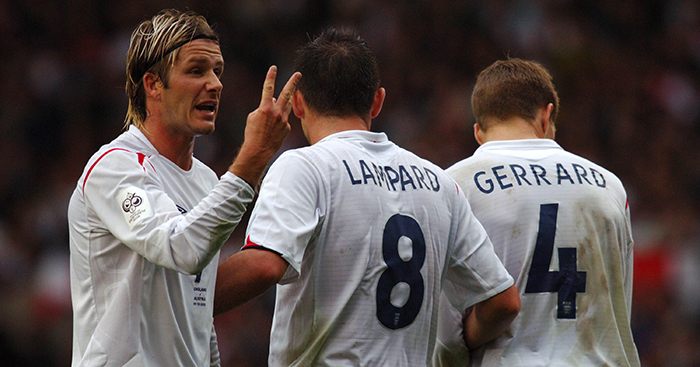 Frank Lampard has provided a fascinating insight on why England’s so-called Golden Generation failed to deliver.

Lampard was a key part of what many believed to be one of the most talented international squads in the world during the mid-2000s, but they lost in the quarter-finals at both the 2002 and 2006 World Cups as well as 2004 European Championships.

And Lampard believes the cliques in the squad and lack of real friendships between players at different clubs were a big contributory factor for the Three Lions’ failings.

“I stayed with John (Terry), Wayne Bridge, Shaun Wright-Phillips, Joe Cole; you were set in your ways,” Lampard said in a 17-minute video with COPA90.

“Unfortunately, as a group, that was a real negative of the England squad over the years. We all came in our little groups, we played a game, and then went away again.

“We were playing at odds against each other through the season then we came together…but I think we missed a trick.

“The Spanish and the Germans who were starting to develop were bringing through these groups from the Under-21s, all friends, all knew each other.

“I always remember Argentina and Hernan Crespo. He went to play a game and came back and was talking about how great the spirit was in the camp.

“For me it because if you’re an Argentinian player, generally they play all over the world, then they all come back to Argentina and go, ‘this is our country’. Whereas we spent all year going against each other, then it was expected to come good.

“I think now the FA are doing a bit better because they’re starting with the youngsters. The Under-17s have just won the World Cup, you need to bring them through now.”