Watch: Frankfurt bench spills onto the pitch as DFB Pokal winner is scored 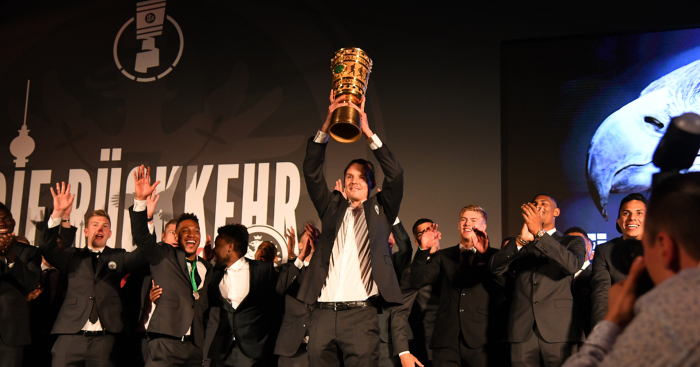 The final at the Olympic Stadium in Berlin would be Jupp Heynckes last in his fourth spell in charge of Bayern, and it saw him come up against his replacement, Eintracht boss Niko Kovac.

Kovac’s side went one up inside 11 minutes of the final, Ante Rebic playing a one-two with former Tottenham man Kevin Prince Boateng, before slotting home.

Robert Lewandowski had hit the bar before the opener, and he levelled the match early in the second period, before Rebic re-established the lead with less than 10 minutes to play.

The winner in fact came in controversial circumstances, Bayern being refused a penalty on a VAR call – which Kovac even acknowledged should have been given – and Frankfurt broke away from the resulting corner to seal the win in injury time.

With goalkeeper Sven Ulreich up, Mihat Gacinovic simply had to run the length of the field with an empty goal waiting, sparking incredible celebrations from his team-mates and supporters, meaning the game didn’t even restart.

Look at what it means to the players. Amazing scenes. pic.twitter.com/moIFBNktEb