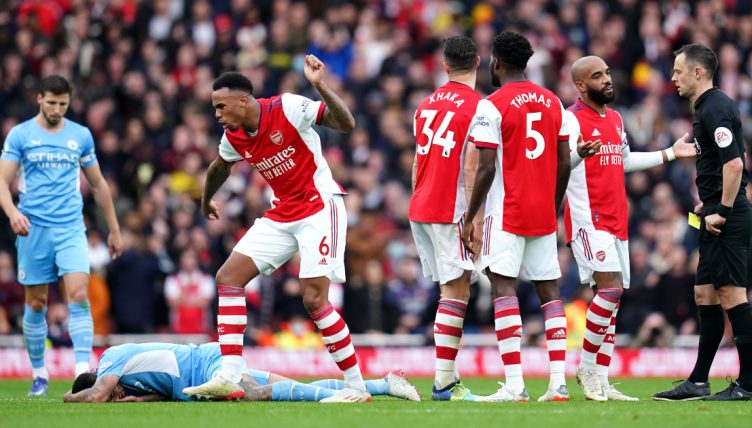 Centre-back Gabriel Magalhaes was given his second yellow card and was sent off for a foolish challenge on Gabriel Jesus in Arsenal’s Premier League match with Manchester City on New Year’s Day.

Brazilian Gabriel received his first yellow only minutes before for trying to scruff up the penalty spot ahead of Riyad Mahrez’s penalty after Bernardo Silva was adjudged to have been brought down.

Mahrez scored the penalty regardless and, moments later, Gabriel took out his fellow countryman and namesake Gabriel Jesus.

It was a stonewall yellow. With a beautiful touch, Jesus took control of the ball from a long kick by Ederson with his chest and sent it over the head of Gabriel.

The Arsenal player then ran straight into Jesus, wiping him out. He had even put his arms out to catch the City striker, making the decision an easy one for referee Stuart Attwell.

Gabriel protested passionately to the referee but was held back from making further mistakes by Alexandre Lacazette and eventually accepted he was destined for an early bath.

He then clapped sarcastically at the fourth official as he walked past him.

Just seconds before, Arsenal had almost restored their lead when Aymeric Laporte had headed over his goalkeeper and towards an empty net.

It was cleared off the line by Nathan Ake and Gabriel Martinelli then missed the follow-up.

From the resulting goal kick, Ederson played the ball to Jesus and Gabriel then got his second yellow.