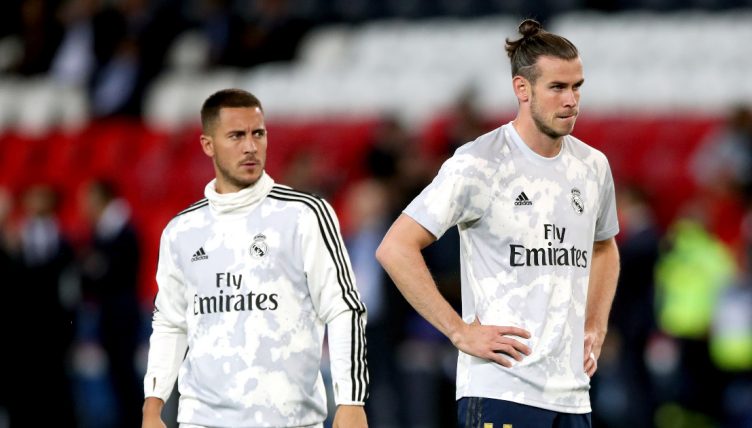 Real Madrid had a difficult evening away at Athletic Bilbao in the Copa Del Rey quarter-final, losing 1-0 courtesy of an 89th-minute curler from Alex Berenguer, and some of their biggest names were forced to watch on from the bench.

Carlo Ancelotti controversially chose to use just two substitutes in Isco and Eduardo Camavinga, meaning that over £250million of talent in Eden Hazard, Dani Ceballos, Gareth Bale, Luka Jovic and Federico Valverde remained unused as the team laboured to a poor defeat.

Hazard had spent most of the second half warming up on the sidelines as the Belgian prepared to come on, but was surprisingly sent back to the bench as his manager had no interest in using him.

The 31-year-old has had a difficult time at Real Madrid since his £100million move from Chelsea in 2019, and this selection snub will have done nothing to help his already dented confidence.

Bale could see the funny side of it though, and he didn’t seem to share the disappointment of his teammates. The Welsh superstar laughed as Hazard was sent back to the bench, his warm-up efforts in vain.

His manager’s reasoning was that the substitutes could have made a better impact later on if the game had reached extra time.

“We didn’t change our game plan because extra-times would have helped us and gave an advantage, our rivals had spent more energies,” the Italian manager stated after the game.

However, the late winner for the hosts meant that no such opportunity arose. Oops.

Gareth Bale laughing at Eden Hazard after Hazard was sent back to the bench in the 2nd half even though he's been warming up for 30 minutes 😔
Ancelotti is a beast pic.twitter.com/ag1tpIDP01