Watch: Gary Neville interviews an Arsenal fan outside the Emirates 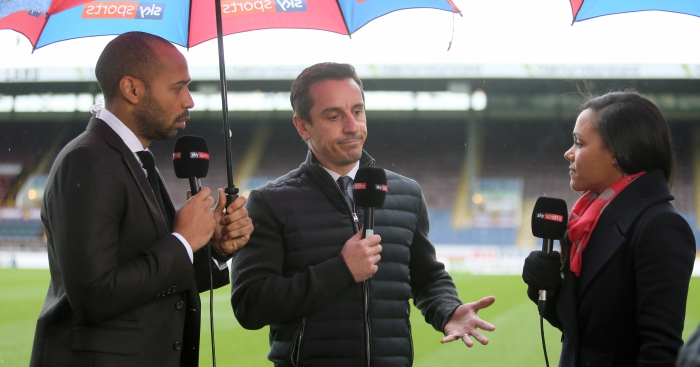 Former Manchester United defender Gary Neville has been strong in his criticism of Arsenal recently, none moreso than in their 3-0 League Cup final defeat to Manchester City.

“Absolute disgrace they are,” Neville seethed during his co-commentary as Arsenal crashed to defeat at Wembley, and many supporters agreed with his assessment.

It wasn’t the first time the former right-back has been known to criticise the Gunners, with a number of occasions in the past being brought up as some fans questioned whether he had a personal vendetta against the club.

So, what did Sky Sports decide to do? Of course, send him out to interview supporters outside the ground ahead of Arsenal’s league return against City.

Neville encountered one particular Arsenal fan, from Los Angeles, California, who gave a brilliant overview of the current situation at the club.

The man had travelled from Madrid to watch the match, and said: “I just want to see passion. The result doesn’t matter. It’s all about respecting the people who come out to watch them play.”

Watch the full interview before, during which Neville remarked: “Are you a TV presenter because you’re better than me.”

Arsenal fan showing Gary Neville how to do a proper report from outside the Emirates Stadium. #AFC [SKY] pic.twitter.com/xevR0AtoLw

Can you name every player to score one Premier League goal for Arsenal?