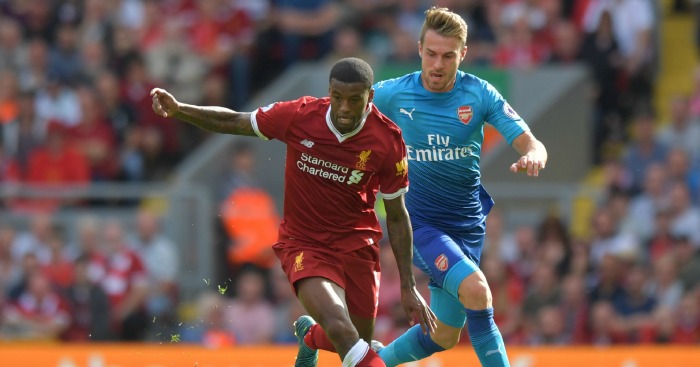 Liverpool hit Arsenal with a whirlwind performance in the first half of the two sides’ clash at Anfield, with Aaron Ramsey among the visiting players who struggled to keep up with the tempo of the Reds.

Arsenal were left reeling from the pace and intensity of Liverpool’s start and never recovered, with Ramsey being singled out in particular for a lacklustre display.

The Wales midfielder was replaced by Francis Coquelin at half-time after goals from Roberto Firmino and Sadio Mane had given Liverpool a 2-0 lead.

Ramsey’s display – and indeed the respective performances of both teams – was summed up when he was completely left for dead by a rampaging Georginio Wijnaldum, who burst from deep to skin his opposite number not one but twice before finally leaving him on the floor.

Can you name every goalscorer from the last 10 Liverpool v Arsenal clashes?