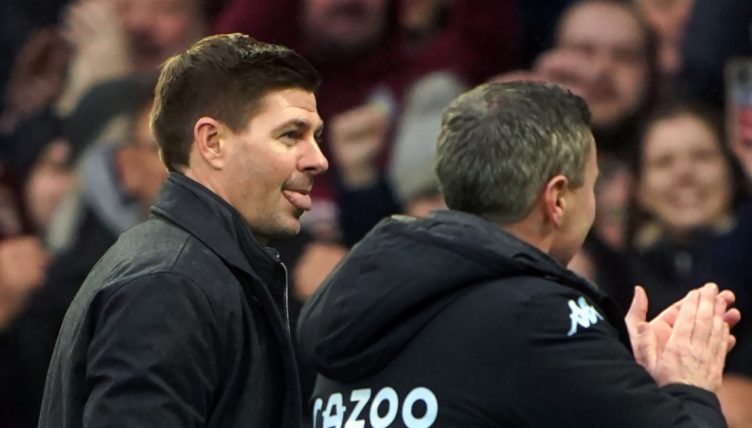 Steven Gerrard stared down the Everton support on his return to Goodison Park as Aston Villa manager during their 1-0 victory in their Premier League early kick-off.

Liverpool legend Gerrard did not receive a warm welcome on his return to his former club’s fierce rivals.

As he walked off the field at half-time, his side up 1-0 through a late Emiliano Buendia header, Everton fans gave him jeers and shouts as he went past.

Gerrard showed no sign of being intimidated, staring at the Everton fans with a wry smile.

The former England international took the Villa job earlier in the season, replacing club favourite Dean Smith at the helm at Villa Park.

He left the Rangers job mid-season for the Premier League chance, having regained the Scottish Premiership title from Celtic in the 202-21 season, Rangers’ first since their liquidation in 2012.

Gerrard is much-fancied as the eventual successor to Jurgen Klopp at Anfield but first will have to prove himself at Aston Villa to become a serious contender the role.

He has had a decent start to life as Villa manager, winning five, drawing one, and losing the remaining five

However, those include matches losses against Liverpool, Manchester City, Chelsea, and Manchester United.

The 2005 Champions League winner has also managed to tempt former Liverpool team-mate and Barcelona player Phillipe Coutinho to return to England and join his Villa team, Coutinho scoring on his debut against Manchester United.

Gerrard received a similar reception at Old Trafford when his Villa side lost 1-0 in the FA Cup.

Make no mistake, Steven Gerrard is fully up for this! 😤 pic.twitter.com/zW7wmr3Gxf