Watch: Gianluigi Buffon rolls back the years with brilliant reaction save 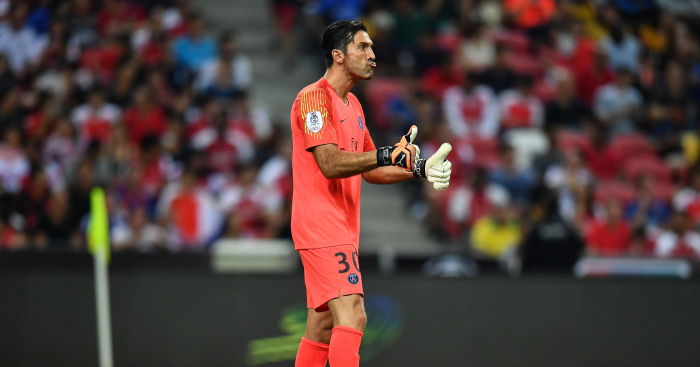 After keeping a clean sheet in his Ligue 1 debut, former Juventus goalkeeper Gianluigi Buffon made a stunning reaction save to keep Guingamp out in his second PSG appearance.

Buffon left Juve this summer after an astounding 17-year career at the club, lifting 20 major trophies in that time.

The 2006 World Cup winner moved to Paris to join Thomas Tuchel’s side, helping them to a 4-0 victory over Monaco in the Trophee Des Champions before another resounding win in the league, defeating Caen 3-0 on the opening weekend.

And Buffon rolled back the years as he kept out Nolan Roux with a brilliant reaction save early in their second match agaisnt Guingamp.

Winger Marcus Thuram had burst down the wing and as Buffon went down for Nicolas Benezet’s effort, he miscued and the ball fell for Nolan Roux, who looked set to open the scoring on 13 minutes.

However Buffon somehow recovered to stick an arm up, deflecting the effort onto the crossbar and out for a corner kick.

Watch the exceptional save below.