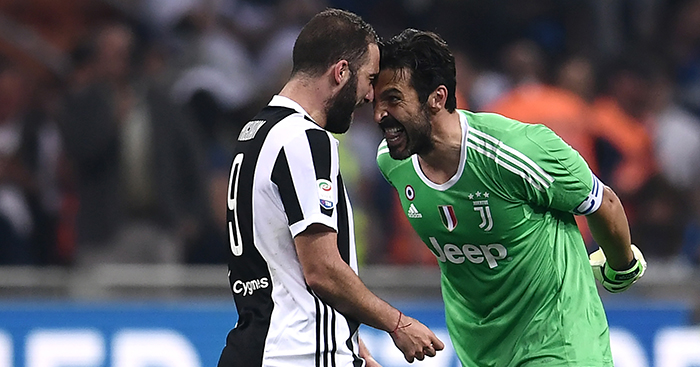 Juventus staged an incredible late comeback to win 3-2 at Inter on Saturday evening – and you could see what it meant to Gianlugi Buffon.

Juve went into the game with a mere one-point lead over Napoli at the top of Serie A after their 1-0 defeat to their closest challengers last weekend, and going into the final few minutes at the San Siro it looked as though Massimiliano Allegri’s side had handed over the initiative.

Douglas Costa had handed the visitors the lead in the 13th minute, but Inter fought back – despite the sending-off of Matias Vecino, who was dismissed by the VAR to lead 2-1 through Mauro Icardi and Andrea Barzagli’s own goal.

However, Juan Cuadrado’s deflected cross-shot made it 2-2 with three minutes remaining before Gonzalo Higuain completed the remarkable turnaround in the 89th minute when he headed in to end his 716-minute goal drought – his longest since moving to Italy.

And the importance of that goal clearly was not lost on Buffon judging by the way he celebrated with the striker after the final whistle.

This is how much it means to him. Passion. pic.twitter.com/JhkgxPFeSl

Allegri, meanwhile, was in a fiesty mood in his post-match interview, accusing the media of “ruining the game” in Italy with their focus on tactics rather than players.

“Do you watch basketball? You have the ball & you have 3 seconds, so who do you give the ball to? The most talented player.

You think formations win in football. Let’s pay for tactics then and say Messi, Cr7 & Higuaín are worthless." pic.twitter.com/bbjaC3kJjR

"You think tackling, passing & running wins in football. Footballing discussions in Italy is all about tactics and theory, you’re ruining the game. You don’t look at players or skills, but only formations. This is what damages our football." pic.twitter.com/4QjRhIe3Et

"How many Serie-A seasons have you seen? I’ve seen 40 at minimum. You can't win every game. Every season has certain moments that need to be understood. You expect us to collect 170 points every season. It's not easy to win always." pic.twitter.com/K8uDq6OXAh

"You keep talking about tactics and you don’t watch Champions play. We must praise the ability of Champions." pic.twitter.com/WlHRSLavFo

Juve are now in pole position to win a record seventh consecutive Scudetto, and afterwards their fans took great pleasure at seeing a video emerge of Napoli fans celebrating on the streets after Inter went 2-1 ahead – and even more so of Icardi looking devastated on the Inter bench.

This Serie A title race is everything!

Elite mentality from The Old Lady 🏆