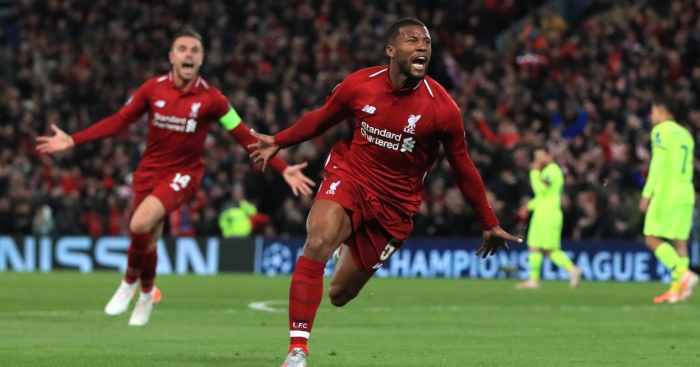 Georginio Wijnaldum proved an inspired substitution as Liverpool produced a stunning comeback to knock Barcelona out of the Champions League semi-finals with a 4-0 victory at Anfield on Tuesday night.

Liverpool trailed 3-0 after the first leg in the Nou Camp, but Andy Robertson set the tone early on by mugging Lionel Messi off with a tasty welcome to Anfield shortly before Divock Origi scored the only goal of the first half.

Robertson had to be withdrawn at half-time due to injury, allowing Wijnaldum to enter the fray, and the midfielder made an instant impact by scoring a quickfire brace to level the scores on aggregate, with Origi completing the turn around with his own second.

“I was really angry that the manager put me on the bench,” Wijnaldum told BT Sport. “I just tried to help my team, I’m happy I could do that with two goals. Unbelievable. After the game in Spain we were confident we could score four and win 4-0.”

The goals were not Wijnaldum’s only notable contribution, with the Netherlands international also producing a neat piece of skill to fool two Barcelona players and launch another attack.