Watch: Gladbach players react ecstatically after going through in CL 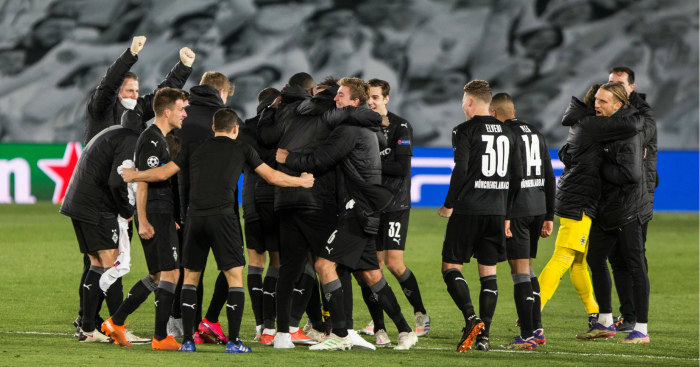 Borussia Monchengladbach players reacted ecstatically after learning they had progressed to the Champions League knockouts for the first time.

Gladbach entered the night in pole position to qualify from Group B, but a 2-0 defeat at Real Madrid put their chances in jeopardy.

After the game had finished, the squad crowded around a tablet to watch the conclusion of Inter Milan v Shakhtar Donetsk match. That game was goalless, but a late winner for either would have eliminated the German side.

Bodies huddled inside thick coats urged the referee to blow the final whistle 970 miles away. Once he did, the Gladbach players began to celebrate with no inhibition.

Gladbach will be eagerly awaiting the knockout draw, but last night they simply enjoyed the moment.

After losing vs. Real Madrid, Gladbach needed Shakhtar Donetsk to draw with Inter Milan to secure their place in the #UCL knock-out stages.