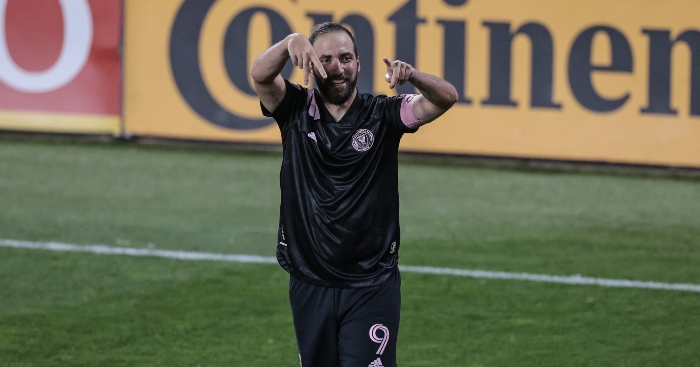 They say you never get the chance to make another first impression, but Gonzalo Higuain has set about proving those naysayers wrong.

Having signed for Inter Miami over the summer, Higuain had a debut to forget against Philadelphia Union – blazing a penalty high over the bar and scrapping with opposition players. “I believe in fair play. I’m an emotional person, and couldn’t accept or tolerate it,” the Argentine said after the game.

“Five players were on me, that is provocation. I felt it was a lack of respect and I reacted. I’m not proud of how I reacted. I’m an emotional person, but I couldn’t tolerate that. I’ve moved on.”

Happily, his third appearance in MLS brought with it his first goal and a timely reminder of his quality.

With the game against New York Red Bulls poised at 1-1 with 10 minutes remaining, Inter Miami won a free-kick 25 yards from goal. The stage was set for the former Real Madrid and Chelsea striker to rectify his initial impact in the US.

And he delivered. With a short-run up, Higuain drilled the ball into the top right-hand corner of the goal past the despairing dive of the goalkeeper with an immensely aesthetically-pleasing goal.

Another highlight of the clip is the American commentary – the over-excited nature, in the manner of a new-born puppy, is a disarming contrast to their more jaded counterparts in Britain.

While doubts have been raised over his fitness levels throughout his career, there is no doubt that Higuain possesses the class required to be a success in the MLS.

Turns out you can alter first impressions after all.