Watch: Granit Xhaka sent off for grabbing Burnley player by the throat 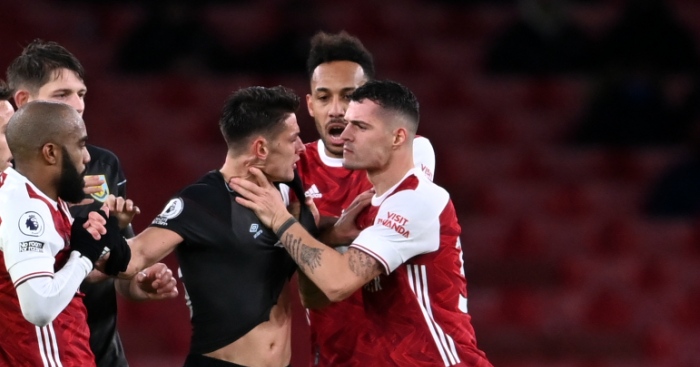 Arsenal‘s Granit Xhaka got himself sent off during his team’s Premier League match with Burnley – for grabbing Ashley Westwood by the throat.

Xhaka seemed destined to leave Arsenal after telling fans to ‘f*ck off’ after being substituted last season, but he fought hard to regain his place in the side and was rewarded by winning the FA Cup.

Now it would seem as if Xhaka has shot himself in the foot. After a tense first half ended goalless, Arsenal had been on the front foot in the second half until the midfielder decided to wrap his hands around Westwood’s throat. The amusing part was that the incident was caused by Xhaka’s foul on Dwight McNeil.

Referee Graham Scott didn’t pick up on the incident initially but, after checking on the pitchside video monitor, decided to send Xhaka off for his sheer stupidity.