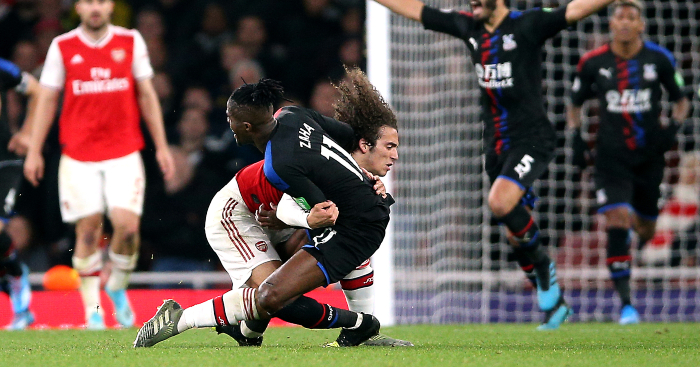 Matteo Guendouzi had yet another eventful game as Arsenal drew 2-2 with Crystal Palace at Emirates Stadium on Sunday.

In a crazy game in north London, Arsenal went 2-0 up early on thanks to goals from Sokratis and David Luiz, only to let the lead slip as Palace equalised through Luka Milivojevic and Jordan Ayew.

Controversy followed as Gunners captain Granit Xhaka shouted “f*ck off” at supporters as he was booed off the pitch, while the hosts had a potential late winner from Sokratis ruled out due to VAR.

Guendouzi has been one of Arsenal’s best players in recent months and showed his class on the ball with a brilliant long pass to create a chance for Pierre-Emerick Aubameyang before displaying his wonderful sh*thousery to prevent Wilfried Zaha going through late on.

Mattéo Guendouzi with a tackle that Yoann Huget would’ve been proud of. On a serious note, sums up his striving for success at all costs mentality. (GIF: @NutmegRadio) pic.twitter.com/tqwqOOFutQ