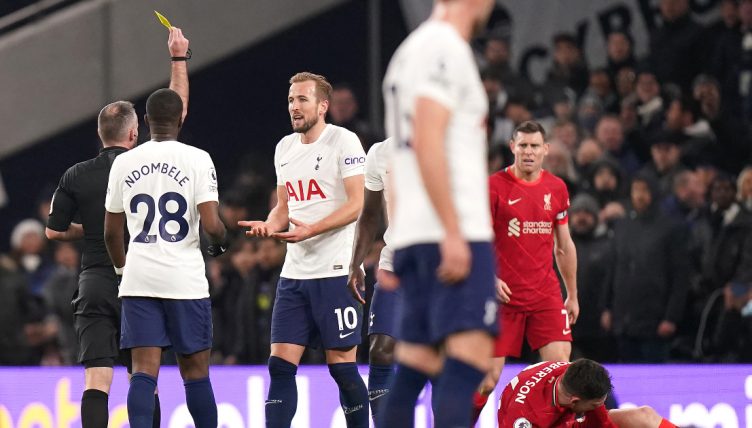 Tottenham’s Harry Kane is having the worst season of his career so far but ended his long goal drought to put his side 1-0 up against Liverpool.

Antonio Conte’s side expressed themselves well on the counter attack in the first half but were fortunate to still have 11 men on the pitch.

Kane, who was clearly pumped up for the game, went in for a heavy challenge with Liverpool left-back Andy Robertson in the 19th minute.

The striker caught none of the ball, with his studs making direct contact with Robertson’s shin, and received a yellow card from referee Paul Tierney.

Many think he was lucky to only receive a yellow, with commentator Gary Neville hinting that he could have been in “serious trouble.”

The England captain has got away with one, and many will question why VAR did not overturn the decision and award a red card.

Liverpool did eventually equalise through Diogo Jota but this moment could change the complexion of the game.

Yes, that should be a red card for Harry Kane pic.twitter.com/orHOKQsamE