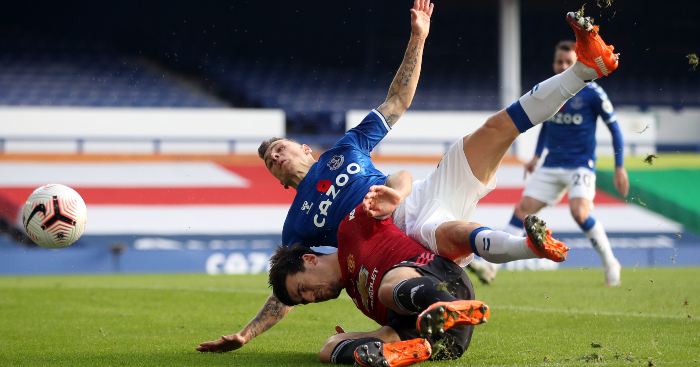 It’s not right to lie, so we’re just going to come out and say it: we quite enjoyed just how bad-tempered Manchester United‘s 3-1 victory over Everton became as the game wore on.

Sure, we’re meant to say these are scenes you don’t like to see in professional football, but bollocks to that – quite often such scenes are either A) quite funny, B) more entertaining than much of the actual game, or C) both.

So who couldn’t help but enjoy Seamus Coleman appearing to call Harry Maguire a “fucking diving twat” after the Manchester United defender had been floored by another questionable challenge by Jordan Pickford?

And while we can’t condone Maguire’s heavy tackle on Digne, who was thankfully unhurt, it only underlined the bad blood that was brewing between the two sets of players.

Maguire escaped without punishment after Dominic Calvert-Lewin had strayed offside in the build-up. Ironically, Pickford managed to avoid punishment for his own controversial tackle on Virgil van Dijk in similar circumstances, as the Liverpool defender had already been deemed offside.