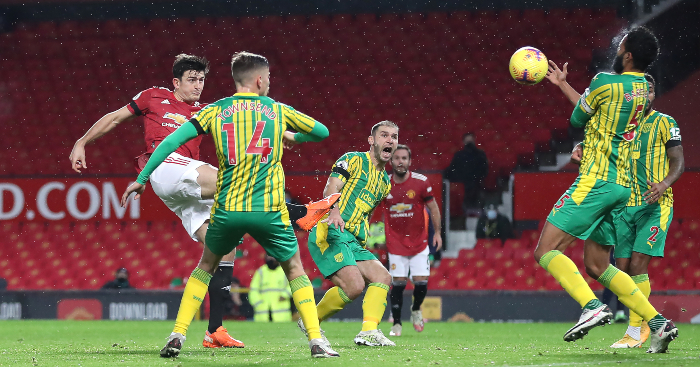 We don’t know how to explain it, but things just seem to happen around Harry Maguire whenever the Manchester United captain takes to a football field.

Ol’ Slabhead indeed seems to have had his own gravitational pull towards calamity in recent months.

Sure, there’s the Brits Abroad escapades, the mental tackle on Lucas Digne, or getting called a “f*cking diving tw*t” by Seamus Coleman for being clattered by Jordan Pickford, but it is something Maguire has used to his advantage in the past.

We’ve seen it before with his baby-giraffe dribbles up the pitch or ungainly turns that somehow work a treat – sometimes being awkward is a useful trait on a football pitch (just ask Marouane Fellaini).

In United’s 1-0 victory over West Brom on Saturday, Kyle Bartley found out the dangers of getting too close to Maguire the hard way, as he was sent sprawling to the floor after being struck in the face by a volley from his opposite centre-back.

To be fair to Bartley, he did well to get back up. That’s proper defending.