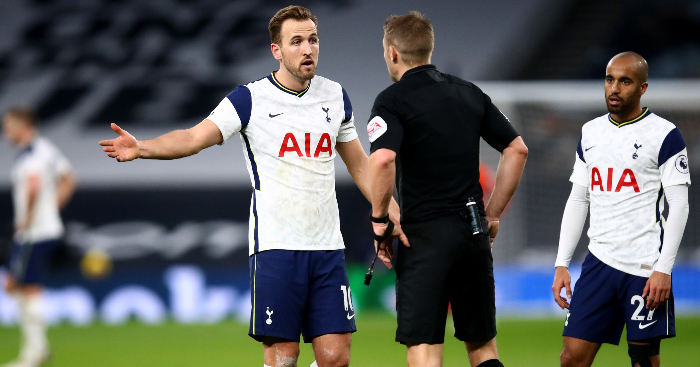 Harry Kane has undoubtedly been one of the Premier League’s players of the season so far, with his newfound creative streak at Tottenham coming in for particular praise.

With 14 matches played, Kane has nine goals and 10 assists to his name, the latter stat the best in the league so far this term, but his attacking talents deserted him on Sunday.

A penalty from Jamie Vardy and a Toby Alderweireld own goal were enough for Leicester City to take all three points in north London as Spurs suffered their second defeat of the week.

It was a loss that left them fifth in the Premier League table with six points separating them from first-place Liverpool.

Kane’s ability to drop deep and create for his team-mates has not been appreciated by everyone, however.

After the full-time whistle on Sunday, Sky Sports pundit Jimmy Floyd Hasselbaink expressed his dislike of the role and was confused as to why others were not creating for him instead.

“Harry Kane coming in way too deep, way too often,” he said. “I don’t like it. You have got the best striker in the country dropping deep. Why? Providing for other players. Why?

“He needs to get chances. If he gets chances he scores them normally.”

🗣 "Harry Kane coming in way too deep, way too often. I don't like it, you have the best striker in the country dropping deep, why?"@jf9hasselbaink is not a fan of Harry Kane's new role under Mourinho pic.twitter.com/bZZnh4w6XG