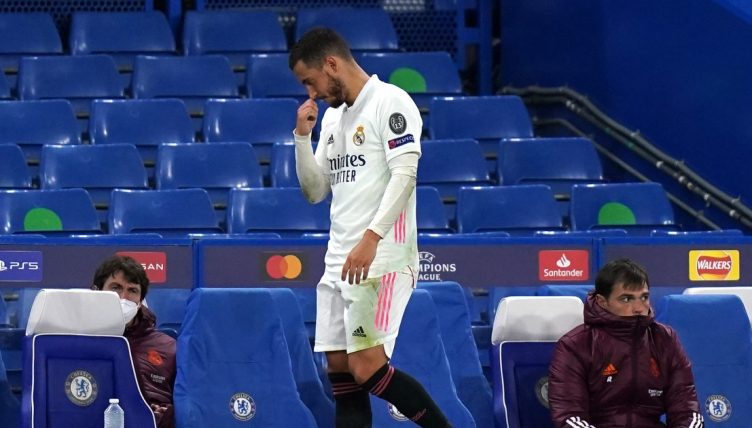 Eden Hazard made his first appearance at Stamford Bridge since leaving Chelsea for Real Madrid in 2019 on Wednesday night but it was his former teammates who were celebrating reaching the Champions League final at full-time.

There was nothing to separate the two teams after the first leg of their semi-final in Madrid, although the 1-1 draw did give Chelsea a small advantage heading into the West London clash.

But aside from a couple of first-half efforts from Karim Benzema, Zinedine Zidane’s side rarely threatened Edouard Mendy’s goal.

Timo Werner headed Chelsea into a one-goal lead on the night in the 28th minute after a Kai Havertz chip struck the bar before Mason Mount rounded off the 2-0 win from close range with five minutes remaining.

As the rest of the Real Madrid team trudged off the pitch after the final whistle, Hazard instead walked onto it to congratulate his old teammates.

Footage of him was shared by CBS showed the Belgian sharing a laugh with Kurt Zouma and Mendy.

Very wholesome! Although it probably did not go down well in Madrid.

Eden Hazard was happy for his former teammates 💙 pic.twitter.com/qhBpwODiAS