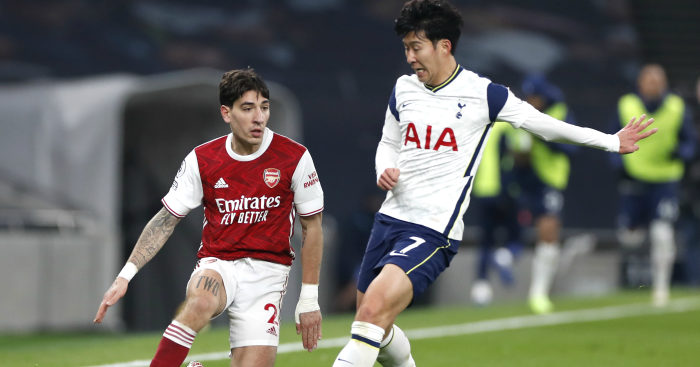 Hector Bellerin’s foul throw during Arsenal‘s 2-0 defeat at Tottenham aptly summarised the Gunners’ performance – and their fans have not held back on Twitter.

Bellerin has become a lightning rod for Arsenal’s dysfunction over recent weeks, with fans expressing their frustration with the long-serving full-back’s performances in Mikel Arteta’s struggling team.

Top of the list of their complaints is Bellerin’s penchant for foul throws. Sixteen have been committed so far in the Premier League this season, a figure that seems ridiculously high considering the basic nature of the act.

Bellerin has been responsible for five alone, a total that would embarrass a Sunday League player.

His effort during Sunday’s north London derby was a classic of the genre. Frustration at the lack of team-mates showing themselves as options? Check.

Eventually deciding to throw the ball into space, after exhausting all possible hand gestures? Check.

Not putting the ball fully over your head, deciding to simply drop the ball back into play instead? That’s a hat-trick.

Hector Bellerín has now produced five foul throws in the league this season, more than any other player in Europe's top five divisions. 🙃

Every time Hector Bellerin makes a foul throw from now on I’m cutting down a tree.

😯 There have been 16 foul throws in the Premier League this season, Hector Bellerin has been responsible for 𝗙𝗜𝗩𝗘 of them…

🥴 No other player has managed more than one pic.twitter.com/YcFO85CUEe

If Bellerin planted a 1000 trees for every foul throw in he took, deforestation wouldn't be a thing.

Seriously, someone needs to show Bellerin how to take a throw-in.

How many times has Bellerin been done for a foul throw this season? I remember at least three.