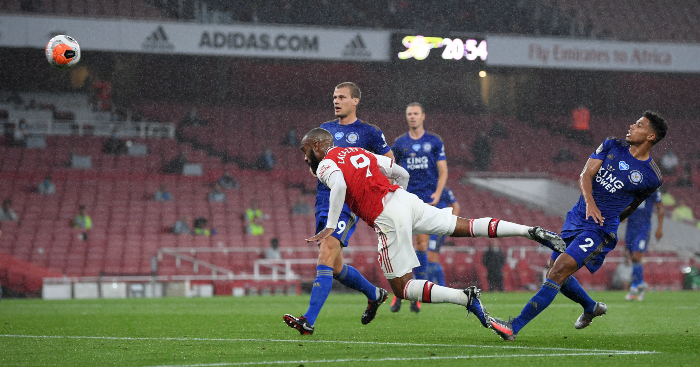 Alexandre Lacazette earned a recall to Arsenal‘s starting XI for their Premier League clash with Leicester City on Wednesday night – and the striker was presented with a brilliant chance to score what would have been a beautiful goal thanks to some superb work from Hector Bellerin.

Amid speculation about his long-term future in north London, Lacazette has found himself in and out of the team under Mikel Arteta, who has been keen to give opportunities to Eddie Nketiah in the Frenchman’s place.

But after Lacazette came off the bench to score in the eye-catching victory at Wolves, Arteta gave him a start against Leicester.

Pierre-Emerick Aubameyang opened the scoring midway through the first half and Lacazette should have made it 2-0 after what can only be described as an incredibly pretty pass from Bellerin.

We’re going to hold this against Lacazette for a while.

Bellerin plays a delightful chip in to the far post right onto Lacazette's head, but he nods it straight at Schmeichel. Should he have scored?