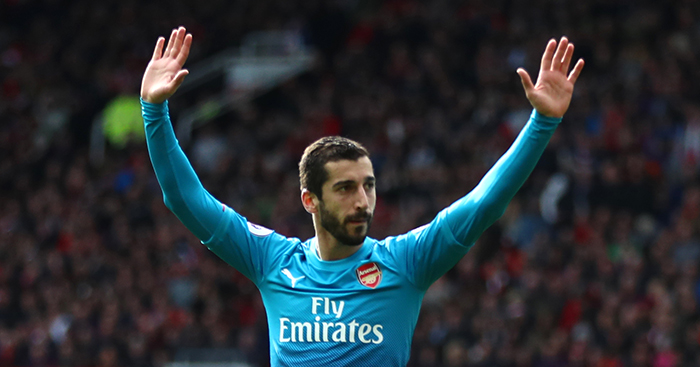 Marouane Fellaini’s late goal condemned Arsenal to a 2-1 defeat at Manchester United on Sunday – but it was a good afternoon on a personal level for Henrikh Mkhitaryan.

Mkhitaryan joined Arsenal from United in January and looked to have earned the Gunners a point against his former side with his delightful goal in the 51st minute, only for Fellaini to pop up in stoppage time with a faint header from Ashley Young’s cross.

Defeat means Arsenal are mathematically out of the race for the top four and will definitely finish behind Tottenham for the second season in a row, but in Mkhitaryan they seem to have a player worth getting excited about.

It was not just his goal that caught the eye either; the Armenian completely took out both Paul Pogba and Young with a wonderful display of strength, balance and close control.

Arsenal have now failed to win in their last 11 trips to Old Trafford, but Wenger, who was handed a gift on the pitch by Sir Alex Ferguson before the game, felt it was harsh on his much-changed side.

“The players are destroyed because they gave everything and were caught in the final minute,” Wenger told the BBC.

“There were many question marks if we would be strong enough to fight but the quality was good the spirit was good, many players stood up. It was a negative result and a positive performance.”