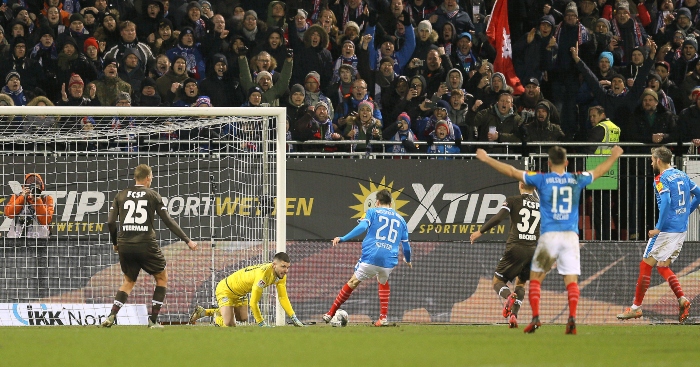 Comedy has always and will always be more entertaining than quality in football – and we were treated to a couple of minutes of peak comedy at the end of Kiel’s win over St Pauli in 2.Bundesliga on Monday.

Leading 2-1 deep into stoppage time, Kiel thought they had blown the chance of three points when St Pauli were awarded a penalty for a quite ridiculous handball – though VAR was for some reason needed to confirm it.

Henk Veerman’s weak penalty was then saved by Ioannis Gelios, and though the obvious encroachment was not spotted, Jonas Meffert’s touch of the ball before Gelios was, leading to an indirect free-kick on the six-yard line.

That, of course, always leads to comedy, and it was no different on this occasion, with the Kiel players breaking before the ball had been touched and ordered back by the referee.

They got away with it a second time and were able to keep the ball out of the net, but there was still time for two corners, featuring an excellent scramble and handball appeal before the second corner kick was gathered by Gelios and the referee blew for full-time.

Watch the brilliant end to the game below.

Ioannis Gelios penalty save (Kiel) against St. Pauli followed by an indirect free-kick in the box and 2 corners to end the game from r/soccer