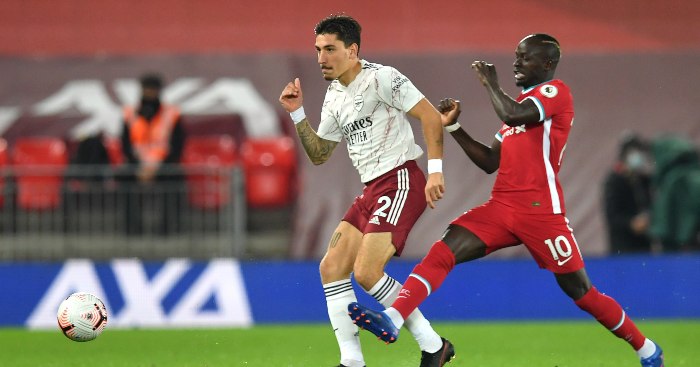 Tasked with trying to handle Liverpool‘s front three, Hector Bellerin’s night could hardly have been more difficult, so worrying about his throw-in technique was the last thing the Arsenal defender needed.

Arsenal were beaten 3-1 at Anfield on Monday night, despite taking the lead as Alexandre Lacazette punished Andy Robertson’s comical mistake.

Sadio Mane quickly equalised before Robertson made up for his error by firing Liverpool ahead. Diogo Jota wrapped up all three points late on but could have had more after a sublime pass from Mo Salah cut out seven Arsenal defenders.

But it was Salah and co’s work off the ball that caught the eye more than anything as they made the Arsenal backline’s defence as misery with their constant pressure – that even Roy Keane couldn’t help admire.

And if Bellerin’s night wasn’t tough enough, the Spain international was left stunned when he was penalised for a foul throw, turning to the linesman to exclaim: “But I’ve done that all my life!”