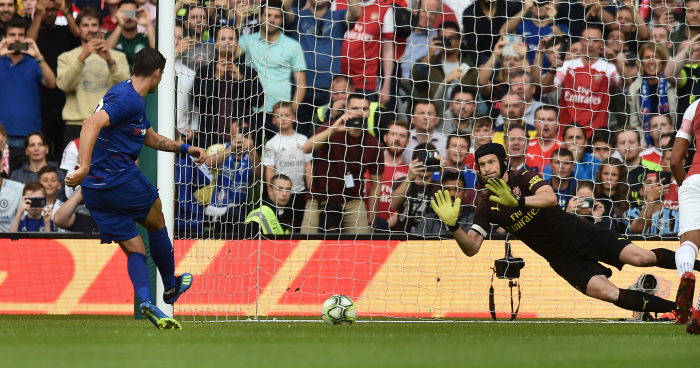 Alvaro Morata had a night to forget as Arsenal beat Chelsea on penalties in an International Champions Cup friendly in Dublin.

After a difficult first season in England, Morata’s future at Chelsea remains in doubt with the Blues having been linked with Robert Lewandowski and Gonzalo Higuain, who has subsequently joined AC Milan, this summer.

And the Spain international hardly inspired confidence as Arsenal fought back to beat Chelsea in a shootout.

Antonio Rudiger put Chelsea ahead with a fifth-minute header, only for Alexandre Lacazette to score in the last minute of stoppage time.

After both teams scored their first five penalties in the shootout, Ruben Loftus-Cheek missed the decisive spot-kick as it went to sudden death.

Morata, however, could have secured the win in normal time when impressive youngster Callum Hudson-Odoi bamboozled Hector Bellerin inside the area to win a penalty.

The 25-year-old stepped up but saw his tame effort saved by former Chelsea stopper Petr Cech.

Morata had a difficult night for Chelsea, missing a host of chances, but new manager Maurizio Sarri backed his striker.

“I don’t know if [Morata’s] not confident. Maybe he was tired,” he said.

“The last three days for him have been very intense so maybe in this match he was tired. I am not worried about Morata.”

To see the rest of Morata’s missed chances, watch the video below.