Watch: Ibra trolls Ronaldo after Juve man tries to distract him before pen 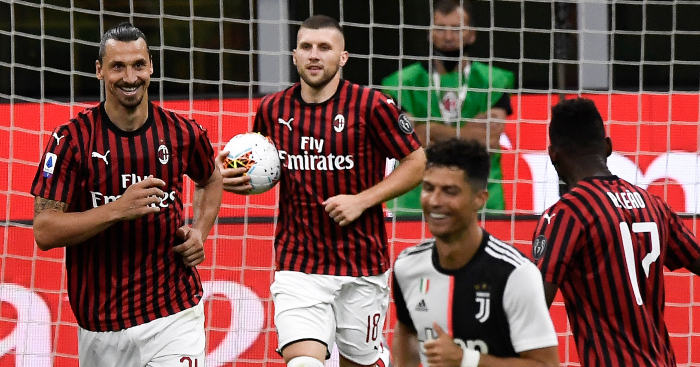 Zlatan Ibrahimovic unsurprisingly relished the limelight as AC Milan stunned Juventus by coming from two goals down to win 4-2 at the San Siro on Tuesday night.

Milan’s victory was the first time they have come from more than one goal down to beat Juventus in their entire history.

Juve appeared to be easy to another victory when Adrien Rabiot and Cristiano Ronaldo struck within eight minutes of the second half starting.

But three Milan goals in five minutes turned the game on its head as Ibrahimovic, Franck Kessie and Rafael Leao all struck before Ante Rebic wrapped up the win with 10 minutes to go.

Ibrahimovic dragged Milan back into the game with a penalty. As he waited to take the penalty, Ronaldo tried to distract the striker by shouting towards goalkeeper Wojciech Szczesny: “You know him, you know him.”

After Ibrahimovic coolly converted the spot-kick, he was pictured turning towards Ronaldo and laughing in his direction, with the Juve forward also laughing on his way back to the halfway line.

Before Ibrahimovic's penalty Ronaldo told Szczesny: 'You know him, you know him' 🗣

Ibra scored, turned around to look at CR7 and laughed ⚽️😄

Scenes at the San Siro 🙌

Ibrahimovic responded to the win with typical modesty, telling reporters: “If I was here from the beginning of the season, we would have won the Scudetto.

“I am president, coach and player, but they only pay me as a footballer.”