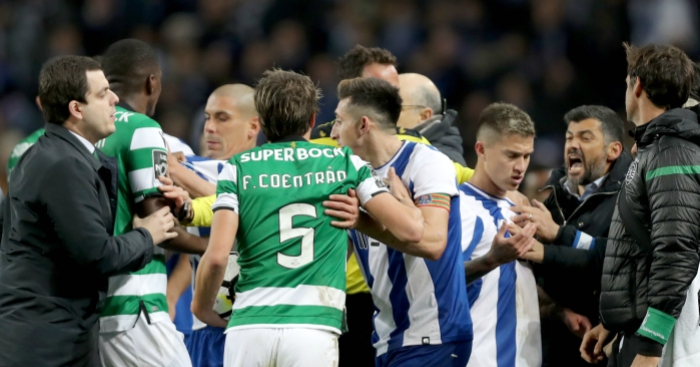 Former Real Madrid man Fabio Coentrao was the centre of a heated situation during a feisty contest between Porto and Sporting Lisbon.

The historic rivalry was on show for all to see throughout the match, which saw Porto open up an eight point gap over their adversaries.

Ivan Marcano had put the home side in front just before the half-hour mark, before Rafael Leao levelled things up right on the stroke of half time.

Yacine Brahimi won the game for Porto early in the second half, with Iker Casillas pulling off a fine point blank save with less than five minutes to play to seal the three points.

However the most notable moment of the match came on the hour, as the ball dribbled out of play for a throw-in on the halfway line.

Sporting man Coentrao went to retrieve the ball, which the emergency medical team had allowed to roll under their seats.

A bizarre encounter followed, with pushes and shoves between the four medical staff and Coentrao, which resulted in two of the staff being removed from their touchline position.

Watch the unbelievable encounter in full below.