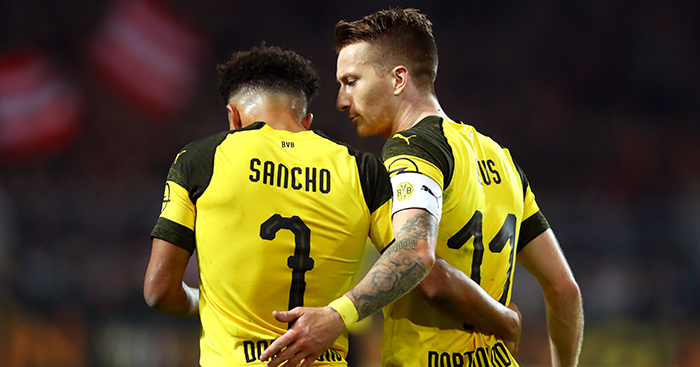 The 18-year-old came to life in the second half in the biggest game in German football, at one point picking up the ball and making Mats Hummels look like a Sunday League defender when Sancho put the burners on and rounded Manuel Neuer.

Paco Alcácer was unable to finish the resulting chance, but Hummels was substituted shortly after.

Sancho played his part in Dortmund’s winner, too, tracking back to dispossess Franck Ribéry and begin the move that ended in Alcácer’s goal.

Bayern had twice led through Robert Lewandowski but Dortmund, inspired by Sancho, were able to overcome them with a brace by Reus and Alcácer’s winner.

Sancho is enjoying life in Germany so far, with six assists and four goals in the Bundesliga this season. Last week he was named in Gareth Southgate’s England squad once again.

Watch Sancho ruin Hummels and then his contribution to the winning goal below.

Sancho winning the ball in the build up to Paco’s goal, what a second half performance from him pic.twitter.com/MitFhxQNd4